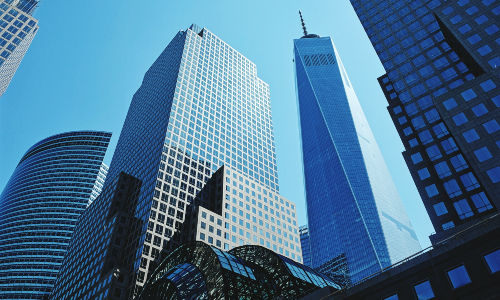 The attacks on Sept. 11, 2001, forever altered building design concepts and codes. Those impacts continue to inform engineering and life-safety professionals.

In subsequent years following the events of Sept. 11, 2001, the implementation of building design concepts that specifically addressed terrorist-type attacks — such as blast-resistance criteria for particular metropolitan areas — began to ebb. What has not waned is designing buildings intelligently to ensure occupants can get out as rapidly as possible in an emergency.

“The threats have changed over the years, but one thing that hasn’t changed is the need to get people out of buildings quickly and safely,” says Brian Coulombe, principal, director of operations, at Ross & Baruzzini | DVS, a security consulting and engineering firm. “Maybe it’s not a major terrorist attack, maybe it’s an active shooter, where a lot of the principles that came out of 9/11 and how we designed buildings are still very much applicable.”

One of the key areas where codes and standards advanced because of 9/11 centers on high-rise safety. Codes such as NFPA 101 (Life Safety Code) and NFPA 5000 (Building Construction and Safety Code) increased the requirements for exit stair width from 44-inches to 56-inches if the stairs are intended to handle 2,000 or more occupants. Stairwells may also be pressurized to keep smoke out in the event of a smoke condition.

Making sure elevator systems remain operational in a disaster was another focal point after 9/11, with a special emphasis on assisting those who may be physically challenged — be it by an existing disability or having suffered an injury.

“Getting that many people out of a high-rise building is challenging under any conditions, but when you have someone who is disabled it further complicates trying to evacuate the building through stairwells,” Coulombe says.

Elevators may now be equipped with battery systems along with generator backup. Water-resistant components may be used in the event fire sprinklers are triggered to prevent shorting out the elevator controls.

“It’s also having raised stills in elevator lobbies so that when water does flow, it’s not flowing into the elevator shaft. It’s simple things like that over time we’ve gotten really smart about how to build features like that into buildings, which aren’t necessarily obvious, but in an evacuation scenario could potentially go a long way,” Coulombe says.

The manhours devoted to making occupant evacuation elevators a reality has been exhaustive to say the least, an effort that will continue for years to come as deployments become more commonplace. The ecosystem around the undertaking has involved myriad stakeholders. A labyrinth of coordination, planning, code-writing and execution has involved engineers, architects, security and fire/life-safety contractors, NFPA, International Code Council (ICC), American Society of Mechanical Engineers (ASME), among others.

Using elevators for occupant evacuation is not a novel idea. The concept dates to 1911’s Triangle Shirtwaist Factory Fire in Manhattan where freight elevator operators saved numerous lives making multiple trips to the garment factory’s location on the 8th, 9th and 10th floors of the Asch Building. In the ensuing decades, the concept was continually discussed and eventually developed with increasing resolve as ever-taller skyscrapers filled skies across the globe.

However, the attacks on Sept. 11, 2001, would push the research community like never before, explains Robert Solomon, principal engineer and chief development officer for SLS Consulting. Solomon recently retired from the NFPA where he served for more the 30 years, including as director of NFPA’s Built Environment Codes and Systems group.

“Sometimes these disasters, they help us finish something that was started a long time ago. I think the elevator criteria is one the great examples of that,” he says. “Here we are in 2021; 110 years later we have the technology, we have the code requirements, we have the hardware, the software, everything. It took a while, but it’s finally happening.”

Solomon — whose time at NFPA included working with the Council on Tall Buildings and Urban Habitat to develop an elevator evacuation guideline — is currently involved in a building project noted as the first high-rise structure in New York City to bring in all criteria for occupant evacuation elevators.

“It’s been a learning curve,” he says. “We’ve got to make sure that elevator folks are in constant communication with the structural folks on the elevator shaft design, and with the architect and with the fire alarm contractor because it’s really the building fire alarm system that gets everything started.”

Once the solution identifies what floor the fire is on, Solomon explains, then the fire alarm system sends signals to the elevator control panel to commence operation.

“All the available elevator cars now go to the fire floor, which is completely opposite of what we ever did. This all is done seamlessly. The occupant will see signs and message boards in the elevator lobby that says the elevators are available for evacuation,” he explains.

In an emergency, occupants will have a choice to take the elevator or descend and exit the building via a stairwell. “Once you get over that 40-story limit, people have another option and they receive close to real-time information about how long it’s going to take for the elevator car to get there,” Solomon says. “Once they load, the elevator tasking system automatically takes that car down to the lobby level; doors automatically open, people get out, doors close, the elevator makes a return trip.”

What Solomon refers to as “tasking” involves a highly complex set of requirements that must be carefully coordinated between the fire alarm contractor, the elevator contractor and the supplier.

“We’re starting to get the experience with these in the U.S.,” Solomon says. “It’s very minimal right now, but it is coming to a city near you.”

Necessity for the Human Factor

Similar to the Triangle Shirtwaist Factory Fire initiating technological notions that would eventually come to fruition, the 9/11 attacks accelerated the development of some experimental security technologies, while creating new markets for others.

Among the advances are continually improving analytics to provide better actionable intelligence. Identity management solutions now being deployed beyond federal buildings and facilities. Depending on the threat level of an institution, a multitude of sensor types can be deployed to detect a range of threats including chemical and radiological. Screening systems for pedestrians and vehicles continue to advance.

“All that stuff makes our posture as an industry much more effective,” says Coulombe, who has spent his entire professional career working on the new One World Trade Center site in some fashion, among many other projects across a range of vertical markets.

No matter the technological advances, the data collected from all those various field sensors must still end up in the hands of a human being.

“Even though the systems have gotten so much more advanced over time and so much more sophisticated in some instances, you’re still relying on a security guard to interpret that stuff properly and do the right thing with that information,” says Coulombe.

Coulombe expresses there has long been too high of an expectation placed on standalone security and fire/life-safety systems for providing holistic protection to lives and property.

“I think so much of it comes down to good staff training and policies and procedures, and what to do if this sensor provides this piece of information. Having those concepts of operation laid out is so critically important, despite how good the system is,” he says. “Give me a 20-year-old system with really sharp security officers over a system that was installed yesterday and someone who’s asleep behind the wheel.”