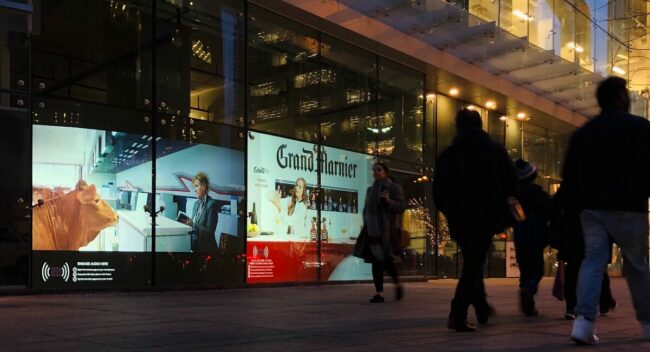 COVID’s impact on retail real estate is putting a larger emphasis on the monetization of storefronts, with AV technology leading the way.

Digital signage as a way to activate a storefront window has been a core use case of the technology for a number of years, and the COVID-19 pandemic may have accelerated the trend and introduced new ideas to AV integrators.

However, those stores had typically been occupied by retail tenants, with the technology used to promote the products and services inside the building. However, many of those spaces are currently vacant thanks to the devastating effects the pandemic and public health guidelines had on the economy.

According to Moody’s Analytics, the retail vacancy rate in the second quarter was 10.5%, which is still high, but an improvement over earlier in the pandemic.

With fewer tenants paying rent in high-traffic areas in busy cities, landlords have instead looked to technology to maximize their ROI as the economy continues to rebound, partnering with AV providers to install digital media showcasing advertisements in windows that would otherwise be ignored.

Two companies that have jumped on this trend are Panasonic and FrontRunner Technologies, with the projection manufacturer supplying the hardware and the digital advertising service creating immersive visuals that help activate those empty storefronts.

Nathan Elliot, founder of Canada-based FrontRunner Technologies, says this idea wasn’t borne out of the pandemic. Instead, he founded the company about four years ago when he noticed empty storefronts while at a red light.

From then, the company has partnered with Panasonic, using projection technology and projection mapping to convince large real estate firms with high-value locations around the world to look at those empty spaces as “literal windows of opportunity and asset classes in their own right.”

The installations are large and typically cover entire windows, with some as wide as 20 feet at eye level.

“It’s compelling,” Elliot says. “You can’t miss it on the street.”.

Now, the company – with the help of Panasonic and AV integrator partners – is taking the concept step further and introducing interactivity to these installations.

Jared Darensbourg, a senior sales manager at Panasonic, says the technology is poised to go beyond just advertising.

“One of the big buzzwords we’re seeing right now is immersive, and immersive is really driving a lot of the technology,” Darensbourg says.

That demand for immersive content pairs nicely with modern projection technology, which Darensbourg says is making a comeback.

Now, new technologies like touchless interactivity and QR codes are being added to FrontRunner’s offerings to help landlords and retailers digitize their advertisements.

“We’re actually starting to create this middle ground between the virtual and the real world, whereby the windows are becoming sort of digital window fronts with the ability to interact with them, which is really, really exciting,” Elliot says.

According to Elliot, the U.S. and other countries have been “over-retailed for decades,” meaning that some level of retail space vacancy was always inevitable, but the COVID-19 crisis has pushed the gas pedal on that street-level storefront vacancy rate.

“With the combined effects of COVID … we became a viable solution for landlords to help monetize (empty spaces) during this period,” Elliot says.

However, the technology has staying power long after the pandemic subsides and retailers once again occupy those spaces.

“That really is part of the digital transformation, that the retailers are just looking — anything and everything to connect it to that omni channel universe,” Elliot says. “There’s no better way than to use the window front as sort of that that epicenter or that point of connective tissue to the digital realm.”