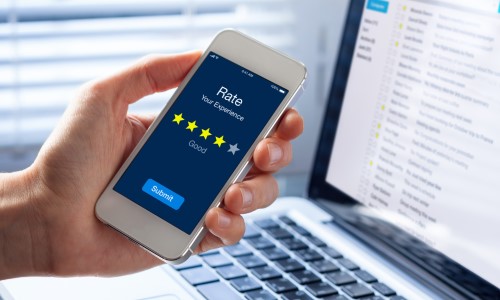 Online reviews, whether positive or negative, can have a drastic impact on the consumer buying cycle and even affect your visibility on search engines.

Reputation management and review marketing can help alarm companies boost revenue in a variety of ways. Online reviews, whether positive or negative, can have a drastic impact on the consumer buying cycle and even boost or push down visibility in search engines, particularly Google, for your alarm company.

There are three categories that Google’s algorithm will parse through: recency, positive sentiment, and regularity.

For example, a consumer will pay $22.26 more after seeing a positive review from a stranger, and $27.42 more based on a recommendation from a friend or family member.

As an alarm company or systems integrator, the more positive reviews your company has online, the more willing customers are to buy from you. Plus, they may spend more money than they initially budgeted for home security items.

In fact, the study showed that reviews from professionals carry a lot of weight, leading consumers to spend up to $31.13 more for items such as electronics. Bad reviews significantly reduce the amount of money that people are willing to pay for that same product by as much as $32.30 less.

How does this affect your electronic security business? People can review your services online, and others will see those reviews and make decisions based on them. These reviews can reach even more people via social media platforms. Positive reviews potentially drive up the amount your customers and prospects are willing pay for alarm monitoring, and bad reviews will hurt your revenue.

Likewise, Google’s algorithm won’t usually consider older reviews as being relevant. However, recent reviews within the last few weeks will be considered as relevant and will likely lead to greater competitive exposure in its search engines.

A user’s intent also comes into play with Google Reviews. Google’s algorithm can sift through reviews and boost your search engine rankings based on intent, and one of those methods is star ratings. Four and five star ratings indicate intent, whether the actual text of the review is positive or negative.

Reviews and the Buying Cycle

There are three specific stages of the buying cycle that customer reviews affect. The first is the discovery phase, where they search for the project, service, or industry that they are looking for without naming a brand. During this non-branded search, the search engine will list some brands, and many are attached to review websites like Angie’s List or Home Advisor.

The second phase is the research phase, where their search term includes your company name, and they’ll look for more reviews from places such as Yelp. The final stage affected by reviews is the decision phase, where they’ll look for your business on social media. From there, the customer decides. The closer your star rating is to 5, and if the first couple of reviews are positive, the more likely it is that they’ll buy from your security company.

Be proactive in requesting new reviews from your customers, instead of waiting for them to submit a review of your company. Your customers are busy. Being more proactive about getting reviews from happy customers can ensure that you’ll get even more reviews from the silent majority. As a side benefit, new positive reviews encourage other consumers to chime in as well.

Through a proactive approach to online reviews, your alarm company’s star rating can increase by one to two points over a short period of time, which has an incredible effect on revenues, visibility on search engines and a more predictable consumer buying cycle.