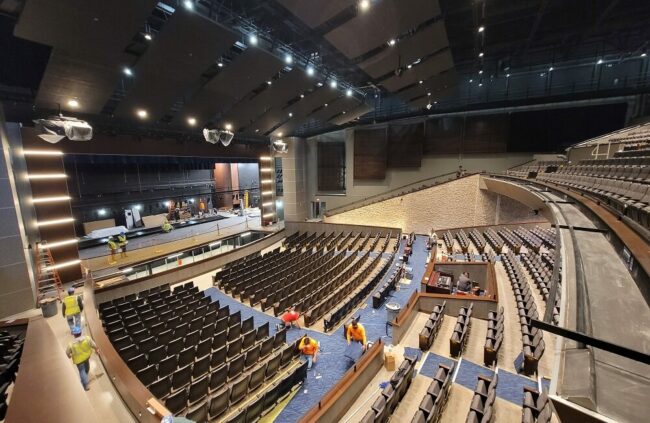 A classroom isn’t what it used to be five years ago, let alone 10 years ago. Just as auditoriums aren’t used only for the annual spring and fall play anymore — rather, they’re multi-use spaces that might host, for example, city council meetings — classrooms are no longer single-use spaces, either.

“COVID-19 made every traditional classroom with a display and a teacher at the front of the room become obsolete,” says Travis Askew, vice president of the southeast region at Los Angeles-based national integration firm Solutionz Inc.

Tom Warda, presentation product specialist at the West Chicago, Ill.-based AV integrator Midwest Computer Products (MCP), notes that he’s not working directly in classrooms as much as he was three years ago. “What we are seeing is an influx of projects that may have been on the backburner,” he explains, “[where] the [K-12 client] has been able to solidify equipment through the use of federal funds.”

Dave Perkins, account manager at MCP, agrees, mentioning that he’s had many school districts tell him they aren’t doing structured planning purchases because they can’t count on certain products being available. K-12 districts are now looking to focus on areas with flexibility, he says.

Perkins offers an example, saying, “If the gym doesn’t have a projector [right] now, it’s not a bad thing. If it comes in two months later, [the school is] operating like it always did.”

Most school districts are fully aware video is not going away anytime soon. Brian Dahl, vice president of the Minn.-based integration firm, Video Services, Inc., says, “we’re never going to go back to 100% in person, it’s always going to be a blended environment of some sort.

Solutionz’s Askew observes that the student of today is very different from the student of 10 years ago. He explains, “They need engagement — they’re used to it — and they expect interactivity.” If those areas are lacking, then engagement is lost, he says. “Collaboration tools like cameras and microphones engage students and drag them into that one-on-one environment, [which is] so critical right now for learning,” Askew declares.

One often-overlooked consideration when working with K-12 clients is the importance of high-quality audio and voice amplification. MCP’s Warda notes that it’s hard for younger children to learn when everyone is wearing a mask. The mask’s muffling effect can result in soft consonants being covered up. “[When] you get voice amplification in there for the students, it definitely helps them understand the lesson,” he observes. “[But] it’s not taking off like hotcakes, like one would think it should.” However, these sorts of technology applications are starting to become more relevant to, and better understood by, the districts with which Warda has worked.

Solutionz’s Askew agrees, saying, “If [students] can’t hear, they’re not in the conversation…they don’t understand what’s going on.” The classrooms of today must be equipped with an audio system with the capacity to make sure that “…every student has the same level of ability to hear what’s going on,” he adds. “[Otherwise,] you risk losing students. It’s one of the most basic things, but, quite frankly, it’s always overlooked.”

Askew continues, “Teachers can [usually] be loud enough hear, but, after eight hours of talking, you’d be surprised at how quiet a teacher’s voice [can be] getting. Students in the back of the room oftentimes struggle with this.” He adds, “By putting in even a basic audio system, you can change that student’s level of engagement and their experience in the classroom.”

Connected to a Network

With hybrid learning taking place, virtual communications platforms like Zoom and soft codecs have taken over. Also, all the technology is connected to a network.

Video Services Dahl notes he completed a project which had over 3,000 devices in one school building all connected to a network, and it didn’t include access control, it was solely AV equipment. One thing his team has been championing for is more remote support for devices. Troubleshooting from afar is time saving, particularly when the client may be hours away.

SingleWire Software’s, Brent Kiedrowski, vice president of strategic initiatives and channels says many schools and districts are moving to IP-based technologies for their intercom and PA systems.

“There is a desire to integrate these solutions with other technology already in place throughout their buildings,” he says. “This could include systems for access control, video surveillance, vape detection, shooter detection, and other IoT devices and systems. Integrators need to be aware of these desired integrations and provide their customers with a path to success,” he says.

“Many schools have migrated from premises-based phone systems to UCaaS or cloud-based phone systems, which has changed the game to some degree when it comes to connecting phones and mass notification. When this is coupled with the desire to integrate paging and intercom systems with a mass notification tool, the technical challenges when attempting this integration can often be overlooked,” says Kiedrowski.

He also recommends integrators should “understand the customer requirements and look to integrate as many systems as possible. The more tools the school can manage from a single system the more value they can derive from it,” he says.

“As many of these systems move from analog to IP, having network expertise on staff would be a feather in any integrators cap. Also, realize that implementing a mass notification system typically involves integrating into systems the integrator has no control over. Be clear with the customer up front that this will require a collaborative effort to save you some time and frustration down the line.”

When it comes to K-12 budgets, MCP’s Warda notes it’s not a vertical that integrators should “oversell.” By contrast, he says, integrators must consciously keep the budget in mind, while working to provide the client with the tools to help them succeed. “You want to give them the best bang for their buck,” Warda declares. “But also know that you can’t be rolling out the top-line products for every single project.”

According to Askew, budgets are “…one of the conversations that’s really difficult in K-12 because the financial decisions have to be made at an administrative level.” He elaborates further, saying, “What the teachers want [and] what the students want and need are not always in concert. Trying to balance all those things together and create a solution that meets all those boxes is a challenge.” One secret that can help school districts maximize their funds is to utilize grants to help get funding for projects.

A final important consideration centers on ensuring that teachers understand the technology they’re utilizing. “If you spend all this great money on technology, but you don’t educate those who are actually utilizing it every day, [then] you’re not going to maximize the return on the investment that you’ve made,” Askew concludes persuasively.

After all, integrated technology is meant to be used, not merely to exist.