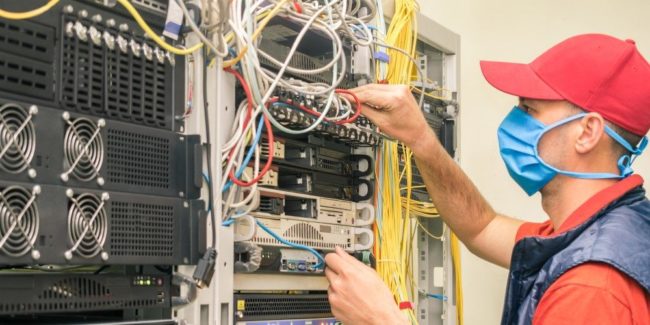 When lockdown orders began to be issued, certain areas did not directly list fire alarm and life-safety systems as being “essential.” Here’s how security associations stepped up.

This month’s article was to be the final installment on the proposed changes for the 2022 edition of NFPA 72, The National Fire Alarm and Signaling Code. That article will need to wait at least another month. A lot has changed during the past month.

I now have a beard and have not been outside of Livermore, Cali. since March, after my return from a conference in New Zealand on the 16th. I am writing this article on the April 5, Palm Sunday.

The change of course is the COVID-19 pandemic. While a large number of us are now working from home, being on now an endless number of conference calls, video meetings and one-on-one phone calls, fire alarm systems still need to be maintained and be in operating condition. To that end, life-safety systems are part of the essential infrastructure.

Depending on the state, country or city that you live and provide services in, you may have found that your lockdown or shelter in place order may or may not directly list fire alarm and life-safety systems as being “essential.” This is an issue that I first experienced during the first week of the local shelter-in-place orders that were issued the day after my return by a number of counties in northern California.

The alarm industry, both for fire and intrusion detection was not directly referenced. One had to read between the lines a bit to determine that the industry and the systems that our industry maintains was essential.

There was some localized confusion over this, with a few isolated cases of well-meaning law enforcement pulling over alarm company vehicles so as to inform the driver that they should not be on the road as they were not identified as being “essential.”

The first round of the definitions of what was essential came from the document Guidance of the Essential Critical Infrastructure Workforce as promulgated by the Cybersecurity & Infrastructure Security Agency (CISA). The first release was version 1.0. This document identifies 12 sectors and the workers who operate within those sectors.

As alarm companies were not specifically identified, the industry needed to start a dialog with government officials for the industry and the systems that the industry maintains to be identified as being essential.

This became a very active grassroots effort on several fronts. The Electronic Security Association, Security Industry Association, The Monitoring Association and the California Alarm Association worked to get the message to 50 state governors as well as the Cybersecurity & Infrastructure Security Agency (CISA).

The National Fire Protection Association and its president and CEO, Jim Pauly, released a document to the fire service that the maintenance of sprinkler and life-safety systems was essential. Fire departments, such as Seattle’s, also sent out notices that the servicing and testing of these systems remained essential.

On March 28, CISA released version 2.0 of the “Guidance.” Within this version, the alarm and life-safety industry is directly referenced. These systems and the workforce that maintains them should not have been overlooked in the first place, but through a two-week effort the various parts of the life-safety and alarm industry, working together, were able to achieve the objective of being identified as essential to the critical infrastructure. Our industry knew this already.

In closing, hats off to all of those within the life-safety industry who continue to work in the field during the coronavirus pandemic, maintaining, servicing, testing and, where and when required, installing all of these vital systems so that if there is a fire, the alarm will be activated and the suppression agent will be released.

The same goes for intrusion detection systems. If there is a break-in, the alarm will activate and those that respond would be notified. Finally, thank you to those that work within the monitoring stations for being there to receive and act on those signals.