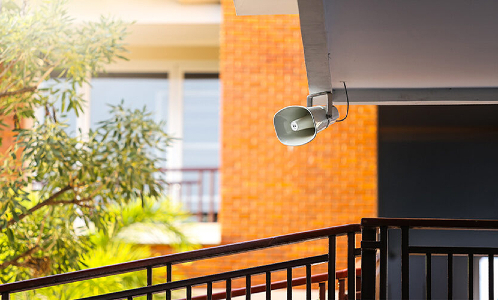 Analog PAs and intercoms are tried and true workhorses but have their limitations. Integrators are well-positioned to help schools transition to network-based systems.

Thousands of intercom and public address (PA) systems are in schools today, and these workhorses have been around for more than a century. Most of us remember being in school, hearing announcements over the public address system, watching teachers communicate from the classroom with intercom technology — and yes, hearing the Pledge of Allegiance each morning over the loudspeakers.

The traditional intercom and public address systems that reside in thousands of the nation’s schools today are based on analog technology. This basic method of communication works, has been the backbone of communication in most schools and, in many instances, can have a lifespan of 15 or more years.

This technology is always on, never moves around, is familiar to campus staff and students and used every day. It makes sense, then, that intercoms and PAs should be the first line of defense in an emergency.

Analog systems, however, have their limitations. Installing security contractors have the opportunity to inform campuses why they should consider investing in network-based intercom and PA systems so they can ensure that with one simple operation, pre-recorded or custom announcements can be distributed to virtually every indoor and outdoor area of a campus, providing life-safety information to students, faculty, staff and visitors.

Over the years, schools have typically had separate cabling for their intercom/PA, telephone and video surveillance systems. But, as Category 5/6 data infrastructure has become common and the standard in both new architecture and retrofit projects, it is only natural that all of these systems, including intercom and PA, should converge on a district’s network.

Manufacturers of intercom and public address systems started the migration from analog to network-based solutions around 2011 by adding network capability to existing analog systems. By 2014, systems began to appear on the market that were entirely IP-based.

IP-based intercom and PA systems operate similar to computer networks where data packets containing digital audio are transmitted from one device to another with each having a unique IP address. Devices such as IP speakers take the digital audio and convert it to analog for broadcast over the built-in cone loudspeaker.

Here are some of the reasons why this network-based approach is the here, the now, and the future:

IP devices use up to seven layers and need the high overhead IP, TCP or UDP transport protocols. Ethernet devices operate effectively at Layer 2 of the OSI network stack model.

Some of the benefits of Ethernet Systems over VoIP (Voice over IP) are:

Many educational facilities and campuses across the United States and beyond still have hundreds of thousands of dollars wrapped up in analog technology — and, in many cases, it is still working for day-to-day and emergency communication. Therefore, a hybrid approach incorporating both analog and network-based solutions can help get the transition process started very economically.

The right partner will be able to work closely with facility management to determine where existing speakers and call-in devices can be re-used with an upgraded, network-based solution.

Here are some areas to consider when evaluating whether to go fully network-based or to slowly transition with a hybrid approach:

Whether it is routine, day-to-day messaging around campus or a critical emergency situation, having a plan and using clear and concise communication throughout the process will greatly impact outcomes. Intercom and public address technology that is familiar and used every day by school staff should be a key component in any school’s emergency preparedness plan.

Next generation, network-based communication technology will have a lower cost of ownership over time and allow for advanced features, integration with existing systems and both on- and off-site administration. Distributing devices evenly along the network and eliminating a central head-end controller will provide peace of mind and ensure communication is “always on.”

Peter Jova is the President of Telecor, an international manufacturer of day-to-day and emergency communication systems. He has been in the sound contracting and communication business for more than 40 years.