Find out how security robots can build models of what is normal, flag anomalies and act to detect, prevent and respond in real-time, and more.

Robots are increasingly being used in security and surveillance applications. Primarily used in public areas in spaces where privacy is not expected, they have been steadily making their way into the market since 2015.

Recent technological developments in a broad range of security-related sensors and in autonomous self-driving technology are driving growth and rapid adoption among leaders in charge of public safety. Using technology to reduce security officer costs and maximize security budgets, such as with access control and cameras, has been the industry trend for years now.

Autonomous security robots are the next step in this trend due to the cost-savings advantage and the advanced technology they bring to a security program.

What does a fully autonomous security robot cost? Similar to buying or leasing an automobile, the price depends on the model and features selected. The robots on the market today typically range between $4 and $15 per hour when broken down to an hourly cost in comparison to security officers.

It is common for the robot manufacturers to provide them on a subscription-based model, meaning the end user is subscribing to the service through the use of the software and robots, similar to subscribing to cable service or a SaaS. In most cases, the custom setup, programming and software configuration is performed by the manufacturer.

What makes the cost of the robot especially appealing is when all maintenance, parts and service is performed and included by the manufacturer as part of the subscription. For systems integrators and end users new to autonomous robots, this means the learning curve is short, typically requiring just basic training on the software user interface.

Thus, training classes and manuals for installation and service are not needed or provided. In any industry labor is expensive, whether for an employee or for contracted personnel, including security officers.

Using a sample hourly wage of $14, with a total cost of $20 per hour with benefits, training, screening, etc., here is a comparative look at the annual cost difference using an average hourly cost of $9 for the robot:

Many of the robots on the market today are able to operate fully autonomously, including charging themselves, which allows for 24/7/365 operation both indoors and outdoors. For patrolling, deterring and detecting suspicious activity, a very common and mundane duty for a security officer, robots can be an ideal alternative.

The theory is to allow the robot to perform these boring and monotonous duties, affording other security personnel to handle more important tasks. As many companies are responding to the impact of COVID-19, they continue to face budget cuts from top to bottom.

Yet, in response to new risks and threats, many have had to double or even triple their security officer spend in addition to enhancing their security systems. These unexpected issues are creating a dire need to quickly identify ways to reduce costs, including security spend.

Thus, five or so years ago when the market viewed the new robots as a “nice to have” option, more and more organizations are now not only seeing the need for them but how they actually improve security and public safety.

For patrolling, deterring and detecting suspicious activity, a very common and mundane duty for a security officer, robots can be an ideal alternative.

Many of the features and capabilities built into autonomous security robots are very familiar and currently in use throughout the security industry. However, instead of mounting these sensors to a wall or building, they are attached to a robot.

Applying these advanced technologies to a self-driving, self-charging, fully autonomous robot with the capability to operate 24/7 is an appealing utility for the industry that brings additional benefits:

Enhance remote video monitoring capabilities. Whether monitoring a property remotely or onsite with a security operations center or a third-party remote video monitoring service, robots provide a unique capability to investigate an incident and reach areas not covered by cameras, delivering real-time, eye-level video and two-way audio. No more trying to identify a subject by what the top of their head looks like.

Support facility management. If a facility is shut down or has reduced operations and personnel, robots can perform a facility tour at ground level, with 360° live video, to inspect landscaping, fencing, lighting, safety conditions and much more (see image below).

Promote COVID-19 prevention and policy enforcement. Robots that can autonomously broadcast custom messages provide a unique visitor and employee experience: “Please maintain social distancing while at this site.” “All employees are required to wear face masks.” “Please use hand sanitizer when entering and exciting this facility.” They may also be used to screen for elevated body temperatures at points of ingress to help protect the entire facility.

Keep personnel safe. Many facilities do not have security officers, leaving employees to handle security situations. The intercom feature built into many robots, coupled with a live view of the 360° video, allows employees to safely address a potential threat from a safe distance. 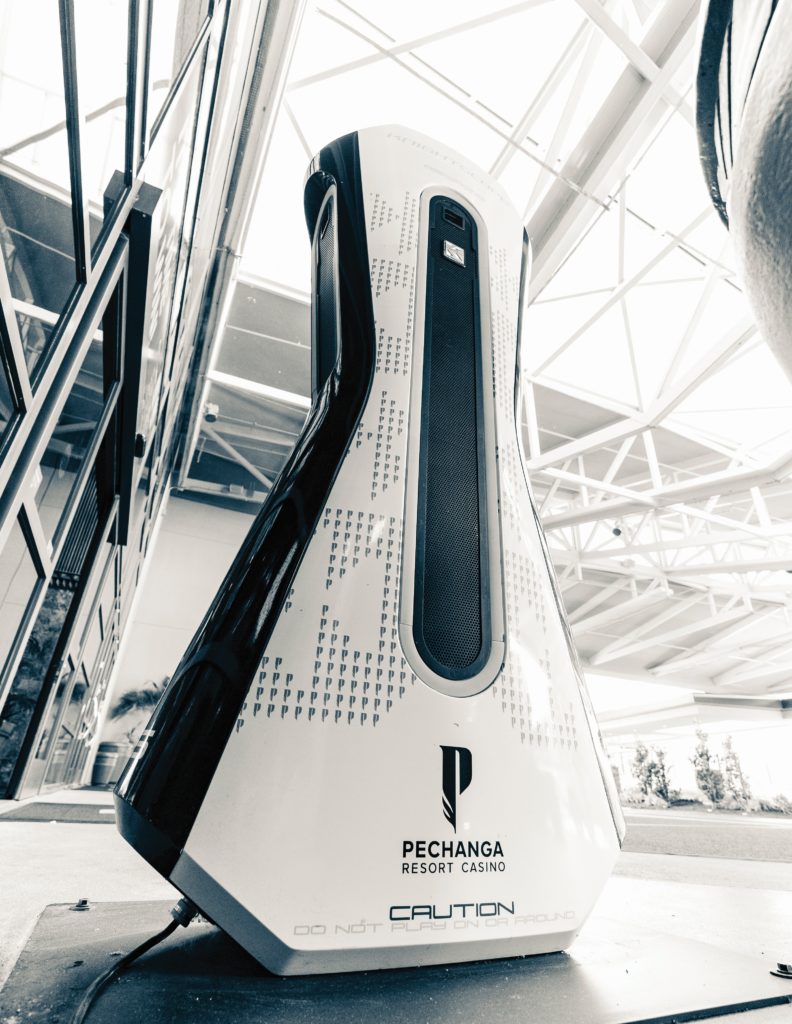 Even broader, many companies are seeing the financial benefits autonomous security robots are having across several areas of their businesses. For example, consider how security robots can impact a general manager (GM) at a manufacturing facility:

Upon her arrival at work, the GM parks her car in the employee parking lot. Six months ago, she would arrive and often find people sleeping in a car or in the stairwells. But now thanks to the autonomous security robot, she no longer has that problem as her workday begins. She’s also no longer worried that her car or any of her employees’ cars will be broken into, as the robot has deterred criminal activity since its arrival.

Her employees are now voicing their appreciation to her for the robot instead of complaining about the lack of security or management’s seeming lack of concern. As one of her employees parks his car, the robot patrols by and says, “Good morning! Be sure to lock your car and please don’t forget your facemask. Have a safe day.” This reminds him to put on his safety vest as well.

The GM has seen the much-needed improvement in safety policy compliance, reducing the number of verbal and written warnings her supervisors issue. Around 11 a.m. she opens the robot’s user interface on her computer to take a video tour around the facility.

Her other robot, who the team has affectionately nicknamed OSHA, is patrolling the manufacturing area. She can see that her team is wearing their safety gear and are maintaining social distances and then hears the robot’s safety tip for the day, “A spill, a trip, a hospital trip. Safety is no accident!” She also notices a delivery driver in a prohibited area, so she contacts the supervisor to address it.

As OSHA heads outside, she can see their two large propane tanks on video. She’s reminded of the potential disaster three months ago when temporary workers from the staffing agency repeatedly moved two chairs and an ashtray close to the tanks to smoke cigarettes. Now OSHA provides a cautionary reminder each time it patrols by, “Highly flammable gas. Smoking is only permitted in the designated areas.”

OSHA switches roles now and is in security mode as it reaches the distant fence line at the back of the property. It stops for three minutes to observe, report and make its presence known, announcing, “This area is under surveillance. Trespassers will be prosecuted.” After having thieves and vandals cut through or jump over the fence multiple times each month, the GM is relieved that neither she nor her team have had to deal with this issue since OSHA arrived.

As the robot continues its patrol, the GM logs out of the software, confident the robot will alert her security team if/when needed. With quarterly business reviews coming up, the GM has good news to report. Worker’s Compensation claims are down, lost time is down, sick pay costs are down, employee retention is up and training costs are down.

There have been fewer terminations, which resulted in zero wrongful termination lawsuits filed in the past three months. The legal fees her branch is being charged is averaging $4,500 less each month than a year ago. With employee turnover decreasing and employee referrals increasing, she’s been able to eliminate the need for costly temporary workers, which likely also explains the downtrend in losses due to internal theft.

Facility maintenance costs are also down — the back fence has not been cut, not one window broken and vandalism has disappeared in the past six months. Year-to-date, this alone is a savings of $6,500 over the previous year. Best of all, employee satisfaction scores are now third highest in the region.

Clearly, the positive results outlined above would not be solely due to autonomous security robots but a collective effort of the management team and employees. Yet the robots’ ability to uniquely impact a facility and business across so many key and critical areas is not only uniquely noteworthy, but increasingly garnering attention of the C-level as well. 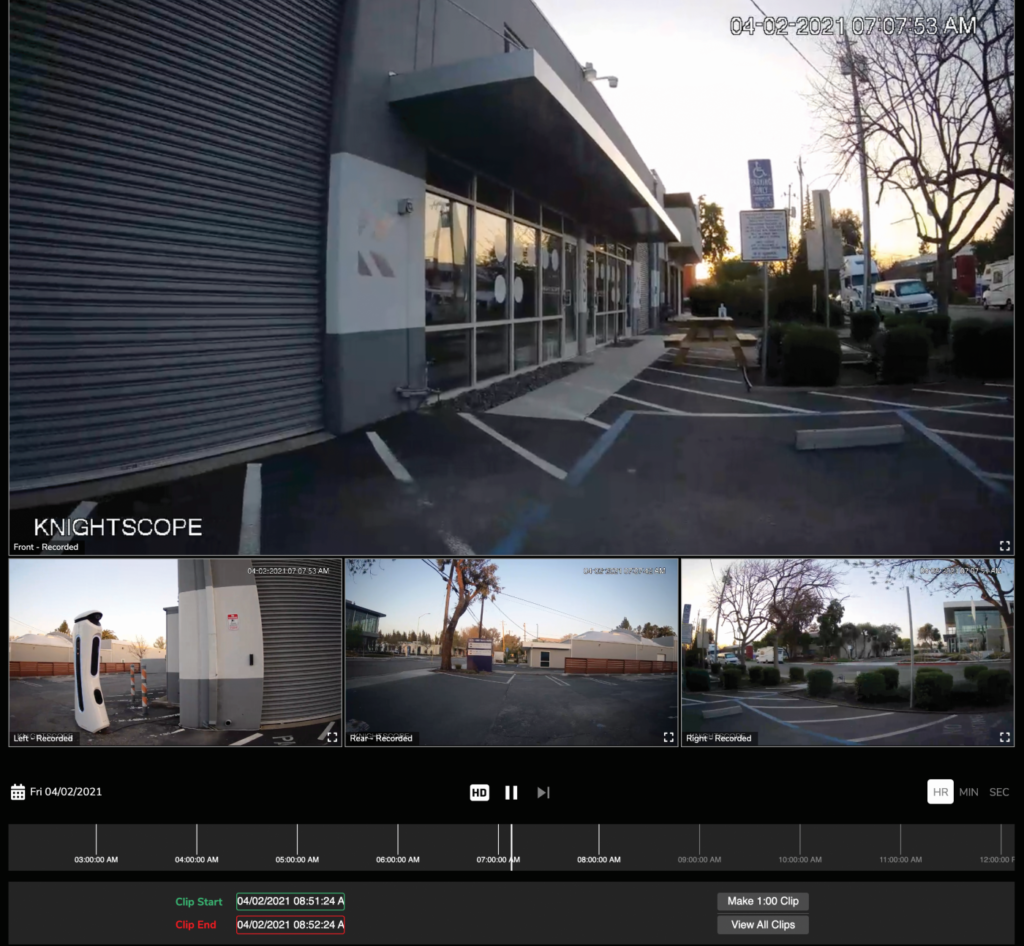 If a facility is shut down or has reduced personnel, robots can perform a facility tour at ground level, with 360° live video, to inspect landscaping, fencing, lighting, safety conditions and more.

How effective are security robots at deterring crime? The evidence is growing rapidly across a wide range of industries. Here are a few examples:

These are simple cases of hardening the target with an entirely new method that highly motivates criminals to search for an easier victim elsewhere.

Autonomous security robots will continue to advance in their capabilities as IoT, edge-computing, 5G, machine learning and other advanced technologies continue to be developed and incorporated into their platforms. As their integration with access control systems, video managements systems, elevator controls and PSIMs expands, it is logical to expect the industry’s demand for them to continue to increase, perhaps even exponentially.