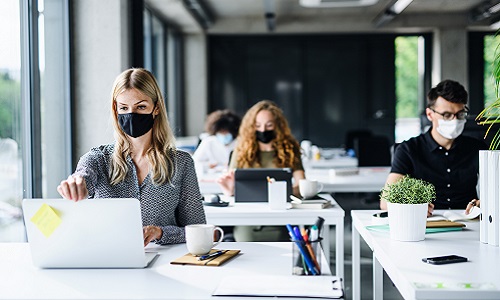 According to a survey, global companies are thinking twice about reducing their use of office space as the pandemic improves.

Now that the COVID-19 pandemic is beginning to subside, most global companies are scaling back their plans to reduce their use of office space, according to a new report from Reuters.

This is potentially good news for the pro AV industry, which counts commercial and enterprise spaces as some of the industry’s top markets.

Reuters, citing a survey by accountants KPMG, reported that just 17% of CEOs plan to cut back on offices, which is down from 69% from an August survey.

“Either downsizing has already taken place, or plans have changed as the impact of extended, unplanned, remote working has taken a toll on some employees,” KPMG said, as reported by Reuters.

With cases declining in many areas and vaccines being rolled out to populations at scale, some companies are planning for a return to the office, but many do not expect operations to be where they were before the pandemic hit.

According to Reuters, just 31% of businesses expect operations to return to normal this year, and 45% say a return to normal will not be a reality until 2022. Just under 25% said the pandemic will permanently change their operations.

The survey also gave insight into when AV providers can expect to see even more business, as most chief executives said they want vaccination rates to exceed half the population before they start to encourage staff back to the office. And, more than 75% of CEOs want the government to begin encouraging people back to work before employers themselves begin to request it, Reuters reported.

If your integration firm is entrenched in the unified communications and collaboration space, then there’s a very good chance you’re already seeing a spike in business as organizations begin to prepare for a hybrid work strategy and upgrade meeting and conference rooms.

However, if your business is still waiting for that spike, things will have to improve a little bit more.