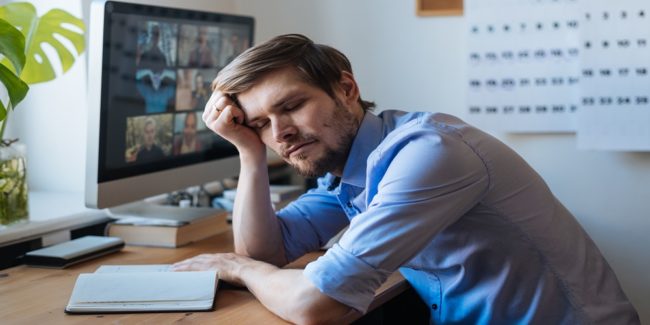 Virtira Consulting survey tells most workers what they probably already knew: all those video calls are doing damage to their health.

While working remotely has become commonplace during the pandemic, so has fatigue from video calls, a new study conducted by Virtira Consulting shows. Perhaps these are the least surprising survey results in a long time, but the challenge for AV integrators and business leaders is overcoming that fatigue.

Virtira’s study reveals that 49% of employees experience a high degree of exhaustion from being required or pressured to be on camera during online meetings.

The Webcam Survey: Exhausted or Engaged? provides insights from over 1,700 managers and employees about the direct impact that company policies on the use of video during online meetings have on the well-being of employees.

The survey also examines whether other factors contribute to the high incidence of reported employee exhaustion.

“As businesses adapt and learn from the remote work experiment, many have implemented policies regarding remote work based on opinion rather than data, causing a negative impact on employees,” said Virtira CEO Cynthia Watson.

“In my conversations with business leaders throughout the pandemic, the majority said that employees on webcams during meetings increased engagement and productivity, but our study clearly shows it can have the opposite effect,” she said.

“With many businesses planning to move towards a fully remote or hybrid/flex model, understanding what policies create productive WFH and office-based employees is going to be critical moving forward – if businesses want to increase productivity and move beyond the pandemic,” said Watson.

It’s up to business leaders—and AV integrators—to find ways to make the flurry of video calls we’re all experiencing these less intimidating and gut-wrenching. One suggestion: keep meetings moving along and don’t dig too deep on a topic unless it’s absolutely necessary.

I’ve never been much of a fan of meetings anyway but that’s especially true in the era of video calls. I try to keep the meetings I run to 15 minutes at the most unless there’s something that really needs to be examined in some depth. Typically, though, the discussion can be had over email if it’s needed at all.

If you want your employees to be excited about the new technology that’s at their disposal, do everything you can to limit how often you use it. You may wonder how using AV tech less will affect your ROI but shouldn’t you really be focused on the effect it’s having on your employees?