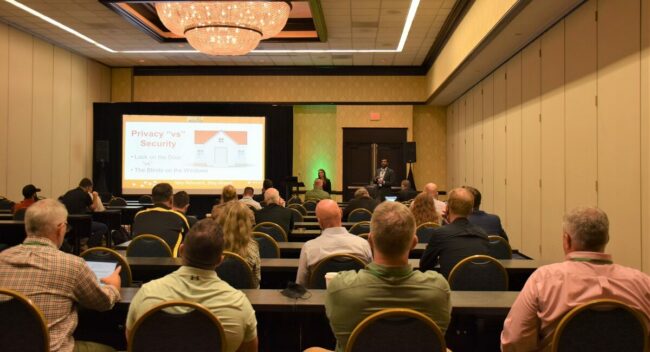 Look out for these common contractual speedbumps that can derail the relationships you have with your customers.

Risk is inherent in the business world, and the integration community is no different – especially for larger projects. That’s why it’s critical that integrators make sure project contracts are as favorable to them as possible.

However, there are some common mistakes integrators make when drawing up these contracts, according to a panel of lawyers at Pivot to Profit.

The session, called “Big Projects, Good Paper,” dove into the legal tools integrators have at their disposal to get the most out of their projects and protect themselves as they do business. It comes after an Aug. 31 NSCA blog post of the same name about how to de-risk project contracts.

Chuck Wilson, NSCA CEO, touched on some of the points in the blog during the session, including considerations around scheduling, supply chain issues (stop us if you’ve heard about this lately), labor resources and the importance of determining prevailing wage.

How to de-risk your contracts

However, we learned about additional de-risking measures from Lauren Mastro, vice president of legal at AVI-SPL. Those measures include additional language to ensure integrators are paid for the work done if a contract is terminated.

Contracts generally include such language that protects the integrator’s payment for work done in the event of a termination, but there may be other costs that aren’t included, Mastro says.

“But what about all those other costs: restocking fees incurred from manufacturers, your demobilization costs and return shipping costs?” Mastro says. “These kinds of things are all additional costs that we may incur as a result of a termination.”

Mastro also called attention to indemnification clauses, which have a tendency to place more risk on the integrator rather than the general contractor. In large part, those contracts don’t include language about whose acts or omissions were responsible for the incident.
“What we want to say is, ‘Contractor/integrator will indemnify the owner GC from claims to the extent caused by the contractor integrators,” Mastro says.

Integrators should also look to gain more control over project scheduling and get paid for overtime or project acceleration costs, she adds.

Protect yourself — and your client — from cyberattacks

The COVID-19 pandemic has opened the doors to remote and hybrid work, but that has also opened the door to cyberattacks, with 74% of respondents to a recent survey linking recent business compromise to remote work technologies.

Now, language about cybersecurity is finding its way into contracts as organizations look to protect themselves from potential cyberattacks that come as a result of an integration firm being compromised, says Siddharth Bose, a former systems administrator and attorney at Ice Miller LLP.

“These days, every organization should have some level of cyber liability coverage,” Bose says. “More and more customers are requiring integrators and subcontractors to carry cyber insurance.

The cybersecurity insurance industry is relatively new, but is becoming increasingly important as the threat landscape becomes much harder to navigate.

These policies can protect integrators in the event of business interruption due to cyberattacks like ransomware, but really come into play when customers are harmed as a result.

Bose urges integrators to do their research on cyber-insurance policies and really understand their coverages.

“It’s important for you to understand what the coverages are, what the exclusions are, what they are protecting you with and what they’re not,” Bose says. “Because the worst thing that can happen is you say you have cyber liability insurance, but when it comes time to file a claim, you find out you’re excluded for a variety of reasons.”