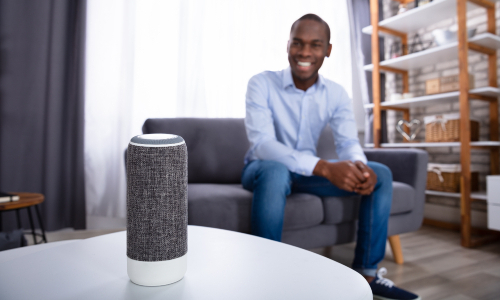 Privacy concerns aside, voice control is set to become the most important change to user interface design since the touchscreen revolution.

I was inspired by a recent Twitter conversation to write this article stating what I consider a fairly obvious fact, but clearly not everyone agrees.

So let’s talk about why I believe voice control will be prevalent in every single home within the next 10 years.

To start, let’s talk about one of the biggest objections I hear: voice control isn’t always the best method of control. Sometimes you have company over, there’s a lot of background noise, you’re worried about the system hearing you correctly, etc., etc. This argument often suggests switches and keypads and remotes are more natural for some people. And while I don’t disagree with that statement today, it makes me think of other technology shifts we’ve all experienced. For example, texting didn’t kill email. Email didn’t kill phone calls. Phone calls didn’t kill physical mail.

Each new form of communication has its time and place. Sure, in the past you might have called a friend to say “I’ll be right over” where a text is easier today, or you might have mailed a copy of a document where an email today is much more efficient, but we all still call, email, and send physical packages despite texting, Snapchat, WhatsApp, and all the other breakthroughs. Yet that didn’t stop Facebook, for example, from acquiring WhatsApp for $19 billion. My point? Similar to text messages, voice control is an additive method of home control, one that supplements, not replaces, traditional user interfaces.

My next argument for why voice control will be in every household within 10 years? It’s just so darn easy. Have you ever tried explaining to a guest how to watch “the game” on a complicated smart home system, or how to play the music they like, or how to control the environment? As good as apps and scenes and keypads can be, there’s nothing simpler than the power of voice. Simply saying “turn on the TV” “turn on the lights” “turn on some music” “turn on the fan” etc., is something anybody from 8 to 80 is comfortable with. Assuming of course it works, which we’ll get to in a moment.

And then there’s the consideration of cost and accessibility. Voice control is mostly a software problem, meaning almost any modern processor with the right I/O can be a host. Compare this to electric cars or neural interfaces or any other novel innovation that requires expensive, hard-to-make technology.

With voice control, you just need some low cost microphones wired up to a DSP (digital signal processor) and the right algorithms to be able to process discernible voice commands from across the room. While costs can be a bit higher today as this technology is so new, there’s no reason voice control won’t be extremely affordable when you consider the lack of expensive components needed to make it work.

Furthermore, voice control allows us to simplify and de-clutter everything in the home, making room for what designers and architects have long desired — a room where you don’t have to see any technology to still enable comfort and wellbeing. Microphones can be discreetly installed today, when desired, providing quick access to lighting fireplaces, illuminating artwork, opening a front gate, or an infinite set of other possibilities. This ability to blend technology with design isn’t just the future we want, it’s the future we deserve.

And finally, one reason I am extremely bullish on voice control in every home can be found by reading or watching just about any science fiction from the 20th or 21st century. As voice control advances and we can have more natural conversations with our surroundings, we see human-machine interfaces being built around voice control from Star Trek and Star Wars to Iron Man, WALL-E, Westworld, and of course 2001: A Space Odyssey. These utopian and sometimes dystopian marvels universally assume the future of humanity involves voice control and voice interaction with machines. I just don’t see us not moving in that direction.

Adoption and the Future of Voice Control

So why don’t we have this now?

For starters, technology adoption takes time. If you think about how much has changed in the last 10 years, from drones to electric vehicles to AirPods that can hold a charge all day, seemingly simple technology still needs to displace prior art, get distributed, and gain market acceptance. I would argue that in the couple of years voice control has commercially been available it’s grown at an amazing rate and clearly suggests it’s the next big user interface after the touch interface revolution iPhone brought in. It will be far less than 10 years from now before you see voice control gain the adoption it inevitably will.

Next, voice control simply needs to work. From Amazon’s Alexa to Google Home, Apple’s Siri and my own company Josh.ai, there’s a wide variety of skills and capabilities. Not every voice assistant is created equally, and they all have merits and faults not universally distributed. Some can handle accents better than others. Some can handle multiple languages.

When it comes to voice control in the home, there’s a lot of engineering that goes into accurate and reliable control over everything from lights and shades to TV, music, HVAC and more. One day I think we’ll have general-purpose assistants that can pretty much do everything, but today assistants are more purpose-built and you need a system specifically designed to run the home.

And finally, the big one impeding growth I hear about all the time is privacy and trust. Many of the voice assistants are built by large companies known for utilizing data in opaque ways, and people aren’t always comfortable not knowing who’s listening in. For example, this article titled “Why would you ever trust Amazon’s Alexa after this?” and this one titled “Google Is Absolutely Listening to Your Conversations” both cause people to hesitate before putting these products in their homes.

Luckily, companies like mine at Josh.ai and others are taking the opposite approach, building privacy-first assistants that never distribute or sell data, focusing instead on trust. It will take time for this movement to grow, but certainly in the next 10 years this will be a solved problem.

So in summary, I see it as inevitable that voice control will be present in every home, at least in the US, within the next 10 years. In fact, I think voice control is just the beginning, opening the way for true automation and intelligence where the home won’t just respond to commands, but will make recommendations, preemptively call for service when needed, remind you about upcoming events, and become a vital part of your life. Of course, I am biased, but I wouldn’t have gotten into this field if I didn’t believe passionately that voice control when coupled with IoT and the Smart Home will dramatically and positively impact all of our lives.