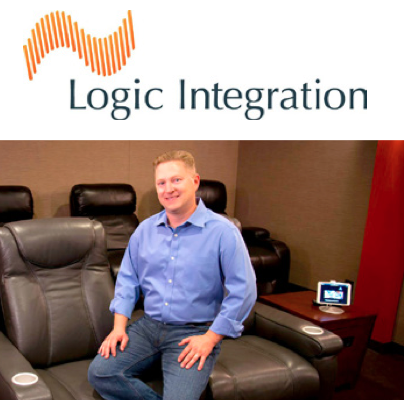 “We’d grown really fast over the past four years and didn’t have the resources, procedures and tools in place to grow,” says Shawn Hansson, CEO and founder. He admits that prior to making some major changes he never knew what was going on in the company.
Logic Integration, located in Denver, Colo. designs and installs home theater systems as well as audio and video systems for commercial, government, worship, residential and other applications. While his company grew from eight to 30 employees since the company’s founding in 2004, it became quite apparent that something had to drastically change when it lost about $250,000 in change orders alone in 2014.

“I’m not kidding when I say this—we did not have a change order process,” Hansson says. “Many items were ordered and installed free of charge.”

He joked that if you wanted a free television, last year would have been the opportune time to get one through his company. But now that there is an actual process, things are looking up. Each type of change order, internal, field directed and external, has its own step-by-step guide. “In 2015 we have done over $100,000 in change orders,” Hansson says.

Hansson has been to every CE Pro Summit. He says the roundtable sessions at the latest events had a great deal to do with the many changes his company has experienced lately.

He learned about procedural flow, department manuals and other companies’ processes.

An overhaul was also made to salespeople’s compensation plans. Previously, all commissions were based on gross sales, now it is based on profitability.

Since that change has been successful, the company is putting a new compensation and profitability bonus plan in place for all operations, including the installation team.

“It’s been tough for some of them, but now they’re starting to see the fruits of how it’s benefiting them,” Hansson said. After all, if the company doesn’t do well, they are out of a job.

Finally, the company has implemented an online metrics dashboard. While Guiding Metrics created the coding and application program interface (API), Logic Integration staff decided on the information they needed and uploaded the data.

Now everyone in the company can see how the business is doing financially, past and present projects, budgeting, hours invested and more. Staff members have tabs personalized to their specific needs as well.

“One of the best things about going to the CE Pro Summit is the ability to network with peers and people in the same position as you,” he says. “Some companies are larger and can give you killer advice as they have been there before.”

With these changes, customer satisfaction has greatly improved.

“I’ve gotten more thank you letters and compliments from customers this year than I ever have in the company’s history,” Hansson says.

And let’s face it; it’s all about the customer. A year ago, Logic Integration didn’t have a customer interface. Now the company uses a live chat and tracking customer relationship management (CRM) system that allows staff to see how many people are on the company website, where they are from and what they are looking at. This enables the company to follow up with potential clients about what they are most interested in.

Customers also have a chance to rate the company’s service, which Logic Integration tracks. If there is an unsatisfied customer, the system emails the management team to address the issue.

Overall, these changes boil down to one idea—consistency. Consistency in training, procedures and communication. And that consistency has paid off. The company profits have more than doubled. In Q1 of last year, the Logic Integration made $600,000. This year’s Q1 resulted in $2 million.

“We have the best Q1 in the history of this company,” says Hansson. “We survived 11 years without this stuff, so now imagine what we can do with it.”

Follow the journey of five decision makers from the leading custom and commercial integration companies.